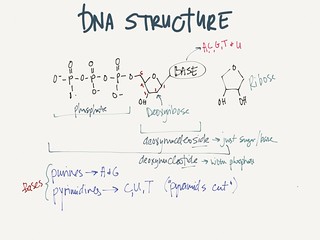 (3)   A purine always pairs with a pyrimidine!

c)     Nucleosides are the sugar and base

2.     Nucleotides are linked by phosphodiester bonds between 3’ hydroxy group of 1 deoxyribose and the 5’ phosphage group of the next deoxyribose 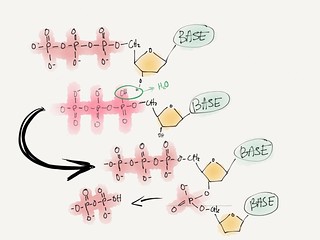 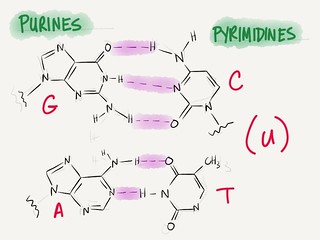 B.     Watson-Crick Model of DNA Structure (what about Rosalind Franklin? rude.)

1.     Cellular DNA is a right-handed double helix held together by hydrogen bonds between bases

b)     A purine always binds with a pyrimidine

3.     Chromosome – one of several large pieces of linear ds-DNA

b)     Single circular chromosome in bacteria (106 base pairs)

c)     Circular or linear in virus

4.     DNA gyrase – enzyme in prokaryotes that uses ATP to break and twist the circular DNA chromosome, resulting in super-coiled DNA

5.     Nucleosomes – DNA wrapped around histones – like beads on a string (mostly basic so they are attracted to the acidic DNA)

A.     Role of DNA – to transmit the genetic information passed down from parent to offspring

b)     mRNA travels to cytoplasm and hooks up with a ribosome

c)     The ribosome synthesizes polypeptides with the help of tRNA

b)    Many codons that have the same first 2 base pairs code for the same AA (CUU, CUA, CUG)

a)     Transitions (subbing one pyrimidine for another pyrimidine)

b)     Transversions (subbing a purine for a pyrimidine, or vice versa)

(1)   Missense:  cause one AA to be replaces with another AA

(2)   Nonsense:  cause a stop codon to replace a regular codon

2.     Insertion mutations – the addition of one or more extra nucleotides in DNA

3.     Deletion mutations – the removal of one or more extra nucleotides in DNA

5.     Replication forks grow away from the origin in both directions:  each replication fork contains a leading and a lagging strand

6.     Eventually all RNA primers are replaced by DNA (by DNA polymerase) 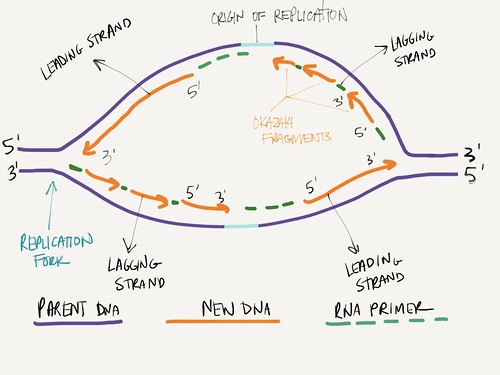 1.     Helicase unwinds and separates strands at origin of replication

2.     Topoisomerases relieves tension of the superwinding as a result of helicase by cutting the strands and reattaching them

a)     Repair enzymes, which remove chemically damaged DNA from chain

b)     Restriction enzymes, which destroy DNA of infecting viruses

b)     RNA contains uracil instead of thymine

c)     Pentose ring is ribose instead of 2’ dexoyribose

b)     rRNA (ribosomal RNA) – serve as components of the ribosome, seem to provide catalytic function (which is a little weird); there are only a few kinds

B.     REPLICATION VS TRANSCRIPTION

1.     Template-driven polymerization:  daughter products (RNA, DNA) made from DNA templates and are complementary to the parent strand

a)     Driving force is removal and subsequent hydrolysis of pyrophosphate from each nucleotide added to the chain, with the existing chain acting as a nucleophile

2.     Transcription – the process synthesizing RNA using DNA as a template; is the prinicipal site of regulation of gene expression in all cells!

a)     Does not require a primer – remember, primase IS RNA

c)     Start site – analogous to the “origin” in replication

d)     Downstream – towards the 3’ end of the coding strand (5’ of template); positive numbers 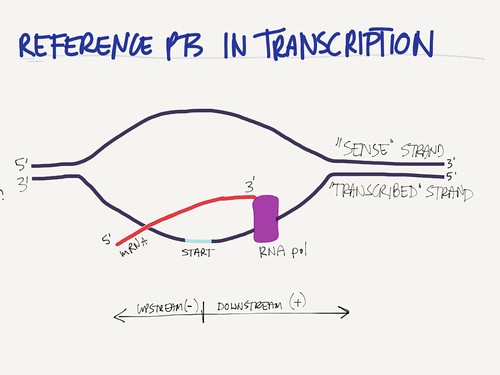 1.     RNA polymerase:  large enzyme complex called the “core enzyme”; to initiate transcription, however, another subunit is required; this entire thing together is referred to as the holoenzyme

(1)   RNA polymerase binds to this and forms a closed complex

(2)   RNA polymerase then unwinds some DNA (creating an open complex)

c)     Termination – when a signal is detected, polymerase falls off of DNA, releases RNA, and transcription bubble closes

2.     Repressible enzymes:  anabolic enzymes whose transcription is inhibited by excessive amts of product

3.     Inducible enzymes:  catabolic enzymes whose transcription can be stimulated by the abundance of substrate

4.     Operon – is a coding sequence for enzymes with upstream regulatory control

a)     Negative inducible operon – repressor protein bound to the operator which prevents transcription unless an inducer molecule is present, which binds to and removes the repressor

d)     Positive repressible operon – activator proteins are normally bound, unless an inhibitor binds to the protein and prevents transcription

a)     Location of transcription (very important)

(1)   Eukaryotes – primary transcription (of mRNA) is modified extensively before translation

(b)   Splicing – the removal of introns and joining of remaining exons

(d)   5’ cap & 3’ poly-A tail – caps and tails placed on either end of mRNA; cap is essential for translation, and both help prevent digestion by exonucleases in cytoplasm

(1)   See specifics for prokaryotic regulation above, and eukaryotic, below

1.     TATA box – thought to be the core promoter sequence in most RNA pol II promoter sites

2.     Sequence-specific transcription factors (SSTFs) – proteins that bind to certain sequences in DNA and  either increase or decrease transcription

3.     Enhancer – a sequence that may be located very far away from the promotor (either upstream or downstream) and still regulate transcription (SSTFs may bind to these too)

The synthesis of polypeptides according to the AA sequence dictated by the mRNA; mRNA attaches to a ribosome, then a tRNA delivers the appropriate AA, then another brings the next; the ribosome binds the 2 AAs together 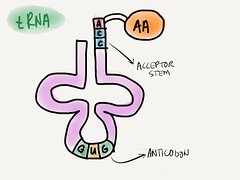 4.     AA receptor site – the opposite end of tRNA (from anticodon) where the AA is attached to (always CCA at 3’ end) 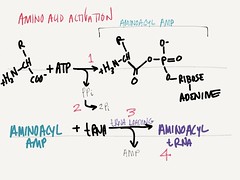 1.     This is an enzyme that binds the aminoacyl-AMP to the tRNA

2.     Must recognize both the tRNA and AA based on the 3D structure

3.     There is at least 1 Aminoacyl-tRNA synthetase for every AA

3.     Step 3 – tRNA loading is very unfavorable, but is driven forward by the breaking of the aminoacyl-AMP bond, which is high energy

4.     Step 4 – eventually, the AA-tRNA bond will be broken and this will power the peptide bond formation 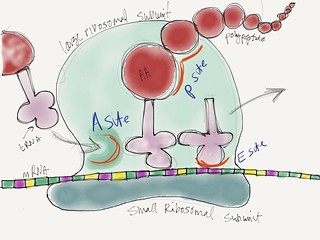 1.     Composed of many polypeptides and rRNA chains in quarternary structure

b)     P site (peptidyl-tRNA site) – where the growing polypeptide chain, still attached to tRNA is located during translation

1.     Occurs in same compartment and at the same time as transcription

(2)   2 – peptidyl transferase activity catalyzes formation of peptide bond between fMet and 2nd AA; tRNA dissociates from the ribosome and the new dipeptide is attached to 2nd AA

(1)   Occurs when stop codon appears in A site

(2)   Instead of tRNA, a release factor now enters the A site, causing peptidyl transferase to hydrolyze the bond between the last tRNA and the completed polypeptide

b)     mRNA processed before translation occurs (spliced, tail and cap added), then transported

e)     Order in which initiaion complex is formed is different: