1.     Genetics – science that describes the inheritance of traits from one generation to the next

4.     Homologous chromosomes – two nonidentical copies of a chromosome (from mom and dad)

B.     GENOTYPE VS PHENOTYPE

2.     Heterozygote – an individual carrying two different alleles at a given locus

3.     Phenotype – physical expression of the genotype

4.     Incomplete dominance – when the phenotype of a heterozygote is a blend of both alleles

5.     Codominance – similar to above, but the phenotype is not blended; they are both expressed

7.     Polygenism – one trait that is influence by many genes

8.     Penetrance – the likelihood that a person with a given genotype will express the expected phenotype (can be related to age, lifestyle, environment, etc)

9.     Epistasis – situation where expression of alleles for one gene is dependent on a different gene (curly hair cannot be expressed if the person is bald)

1.     Sex-linked trait – traits that are determined by genes on the X or Y chromosome

2.     Spermatogonia and oogonia – specialized cells in males and females that undergo meiosis

3.     Similarities of mitosis and meiosis:

●       Both are mechanically similar

4.     Differences between meiosis and mitosis:

●       Prophase I – chromosomes have 2 chromatids, and the homologous pairs align themselves (called bivalent or tetrad); genes are then swapped in process called crossing over or recombination

●       Anaphase I – homologous chromosomes are separated, and sister chromatids remain together 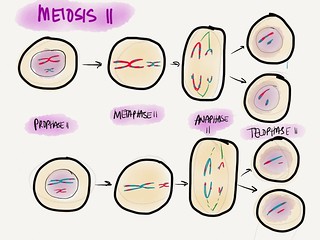 Failure of homologous chromosomes or sister chromatids to separate correctly

1.     Gametes resulting from nondisjunction will have two copies or no copies (resulting in trisomy or monosomy when fusion with another gamete occurs)

1.     Law of Segregation – two alleles of an individual are separated and passed onto the next generation singly

2.     Law of Independent Assortment – the alleles of one gene will separate into gametes independently of alleles for another gene

1.     Cross – mating between plants, used to discern genotypes by looking at phenotypes

2.     Testcross – a way to deduce the genotype by looking at the phenotype of the progeny

1.     Rule of Multiplication – the probability of both of two independent events happening can be found by multiplying the odds of either event alone

1.     The closer genes are located on a chromosome, the less likely they are to be independently assorted

B.     LINKAGE AND RECOMBINATION

1.     Linkage is the exception to the law of independent assortment

3.     Frequency of Recombination – the number of recombinant phenotypes resulting from a cross divided by the total number of progeny:

Two copies of the recessive allele are required to confer phenotype

A single copy of the allele will confer the phenotype

Very rare traits that are inherited through mitochondrial DNA

1.     Progeny of affected frmales are affected

Describes the inheritance traits in populations over time

A.     HARDY-WEINBERG IN POPULATION GENETICS

1.     HW law – the frequencies of alleles in the gene pool of a population will not change over time, provided

3.     HW equilibrium – after one generation, alleles reach equilibrium in which their frequencies do not change

B.     HARDY WEINBERG IN THE REAL WORLD

1.     Assumptions are not possible

●       Migration will likely occur, which will disturb equilibrium

1.     In a population, there are heritable differences between individuals

2.     Heritable traits (alleles) produce traits (phenotypes) that affect the ability of an organism to survive and have offspring

3.     Some individuals have phenotypes that allow them to survive longer, be healthier, and have more offspring than others

4.     Over time, these alleles that lead to more offspring are passed on more frequently while other alleles become less abundant

5.     Changes in the allele frequency are the basis of evolution in species and populations

B.     SOURCES OF GENETIC DIVERSITY

1.     Directional selection:  natural selection removes certain alleles at one end of an extreme (ex:  short giraffes die off because they cannot reach the tall food)

3.     Stabilizing selection:  extremes at both ends are selected against (ex:  birds too large or too small cannot mate)

6.     Kin selection:  animals that live socially share alleles and will often sacrifice themselves for other individuals, thus preserving the alleles

A.     Prezygotic barriers to reproduction (prevents formation of a zygote):

B.     Postzygotic barriers to reproduction

Prevent the development, survival, or reproduction of hybrid animals

1.     Cladogenesis – branching of speciation where one diversifies and becomes two or more new species

3.     Anagenesis – one species becomes another by changing so much that if an individual were to go back in time, it would not be able to reproduce with its ancestors

4.     Sympatric speciation – occurs when a species give rise to a new species in the same geographical area, such as through divergent selection

2.     Analogous structures serve the same function but are not due to common ancestry

2.     Convergent evolution is when 2 species come to possess many analogous structures due to similar selective pressures (bats and birds)

●       Dumb Kids Playing On the Freeway Get Squashed

B.     All life evolved from prokaryotes

C.    Early atmosphere was a reducing environment (no O2), where electron donors were prevalent

1.     Oxygen is an electron acceptor and tends to break organic bonds

2.     Spontaneous polymerization also observed; catalysts thought to be metal ions; this is known as abiotic synthesis (polypeptides made this way are proteinoids)

E.     Proteinoids in water spontaneously formed droplets called microspheres; when lipids are added, lipsomes form, with the lipids forming a layer on the surface of proteins

1.     Coacervates made with pre-existing enzymes are capable of catalyzine reactions

1.     These can grow and when they become too large, split in half