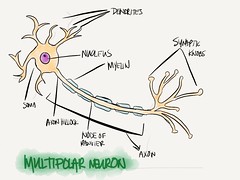 1.     Action potential – localized area of depolarization of the plasma membrane that travels in a wave-like manner along an axon

2.     Synaptic transmission – a process in which an action potential reaches the end of an axon, and is then transformed into a chemical signal with the release of a NT into the synaptic cleft

B.     STRUCTURE OF THE NEURON 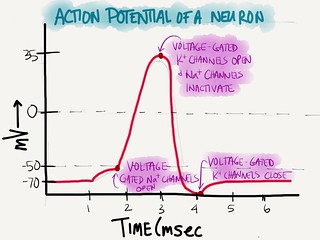 a)     Myelin – insulating sheath around axons made by Schwann cells; no ions enter cells here

(1)   Note that the RMP is much closer to K+ than Na+; this indicates that there are a large number of K+ leak channels and the cell membrane is almost completely permeable to K+

(3)   Remember, when the voltage gated Na+ channels open, the membrane potential jumps up to +35mV, very close to Na+ EP

7.     The Refractory Period – the period of time when a neuron is unresponsive to membrane depolarization; 2 phases:

b)     Relative refractory period – can occur during hyperpolarization of membrane (near the -90mV) where a neuron can be induced to transmit an action potential, but depolarization required is greater (have to go from -90mV → -50mV, instead of -70mV → -50mV)

1.     Electrical synapse – the cytoplasms of two cells are joined by gap junctions, so that an action potential will spread from one cell right to the next (cardiac muscle, smooth muscle) 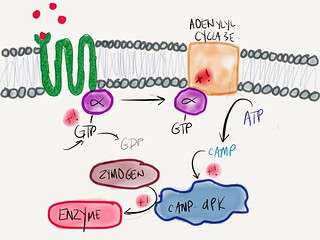 2.     Chemical synapses – the action potential is converted from an electrical to a chemical signal, occurs between the ends of axons and target cells; steps include:

b)     Depolarization of the presynaptic membrane opens voltage-gated Ca2+ channels

3.     EX:  in neuromuscular junction, NT used is ACh, and enzyme to degrade it is acetylcholinesterase (AChE)

a)     These are either excitatory (causes depolarization) or inhibitory (causes hyperpolarization); however, it is not the NT that determines which it will be; the receptors and associated ion channels are the determining factor

3.     Temporal summation – one type of summation where the presynaptic neuron fires action potentials so rapidly that the EPSPs and/or IPSPs pile up on top of each other

4.     Spatial summation – EPSPs or IPSPs form all of the synapses on the postsynaptic membranes are summed at any given moment.

3.     Effectors – end target of motor neurons; either muscles or glands

4.     Efferent neurons – neurons that carry info towards the effectors

5.     Afferent nurons – sensory neurons that carry info towards the CNS

1.     Reflex – direct motor response to sensory input, usually does not involve the brain

2.     Muscle stretch reflex – sensory enuron detects stretching of a muscle, which transmits impulse to a motor neuron body in the spinal cord; the axon of this neuron goes straight back into the muscle and causes it to contract

4.     Reciprocal inhibition – concurrent contraction of one muscle and relaxation of the corresponding opposite muscle

b)     Autonomic – digestion, metabolism, circulation, perspiration, and other involuntary processes 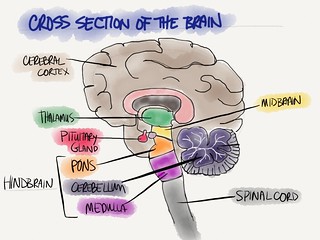 (a)   Thalamus – contains relay and processing centers for sensory info

(b)   Hypothalamus – directly interacts with many other parts of brain; emotions, hormone production and release; primary link between nervous and endocrine centers

(b)   Cerebrum – the large paired cerebral hemispheres; cerebral cortex on outside (made of somas), white matter on inside (made of myelinated axons)

a)     All somatic motor neurons innervate skeletal muscle cells, use ACh, and have their somas in brain stem or ventral portion of spinal cord

(1)   Pregangliotic neuron – soma is in brainstem or spinal cord; its axon goes to the autonomic ganglion outside the spinal cord and connects with postganglionic neuron

(a)   Sympathetic pregangliotic effector neurons have somas in chest/lumbar regions

(b)   Parasympathetic pregangliotic neurons are in craniosacral region

(b)   Sympathetic postgangliotic neurons use NE (almost all)

(2)   Releases epinephrine (is hormone, because it travels by bloodstream)

A.     TYPES OF SENSORY RECEPTORS – extero and intero (external and internal)

4.     Thermoreceptors – stimulated by change in temperature

1.     Proprioception refers to awareness of self or body part position

2.     Olfaction – receptors in the nasopharynx, can detect airborne chemicals that dissolve in mucus covering membrane; the nerves project into olfactory bulbs of the brain

E.     HEARING AND THE VESTIBULAR SYSTEM 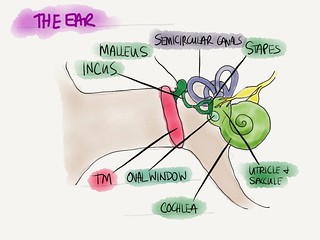 c)     Cochlea – basilar membrane along cochlea, covered with hair cells that have cilia; cilia touch tectorial membrane and hairs are dragged across when bent, which opens ion channels resulting in NT release

b)     Pitch (frequency) – distinguished by which regions of the basilar membrane vibrate; high pitch is near oval window (high frequency, short wavelength); opposite for low pitch

b)     Utricle and saccule – balance-monitoring 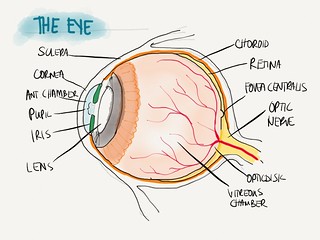 c)     Fovea centralis – center of the macula with only cones, responsible for extreme visual acuity

a)     Contain 1 molecule of retinal, which at rest, contains 1 cis double bond, which is converted to trans when exposed to light

b)     Night vision – accomplished by rods (black and white) 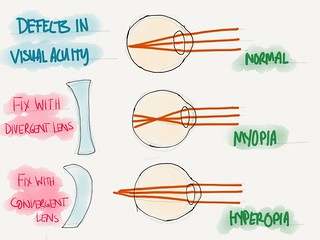 A.     HORMONE TYPES:  TRANSPORT AND MECHANSMS OF ACTION

a)     Synthesized in rough ER and modified in the Golgi

b)     Stored in vesicles until needed then released through exocytosis, dissolve in plasma

a)     Hydrophobic molecules synthesized from cholesterol in smooth ER

c)     These are not made and stored, but made and released (not made if not needed)

B.     ORGANIZATION AND REGULATION OF THE HUMAN ENDOCRINE SYSTEM

1.     Feedback regulation – the interaction between hormone and regulatory hormone or chemical

6.     Neurohypophysis – posterior pituitary, the axons which descend from the hypothalamus and are examples of neuroendocrine cells (neurons that secrete hormones into the bloodstream)