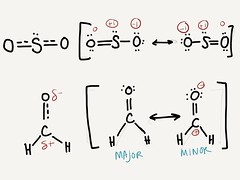 1.     Determining FC of a molecule gives us the ideal configuration (FC should be close to 0)

3.     Best Lewis structures have octet of electrons and FC of 0

1.     May be equivalent or nonequivalent (major and minor form)

Energy required to break a bond homolytically (one electron from each pair goes to each fragment of the broken molecule, forming 2 radicals)

1.     Heterolytic bond cleavage (dissociation) – both electrons go to the same atom, forming a cation and anion

A bond formed between 2 nonmetals; when each contributes one or more of its unpaired valence electrons (these are shared to create an octet) 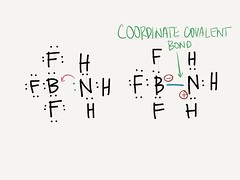 a)     Electronegativity of each atom will determine polarity

2.     Coordinate Covalent Bonds – one atom will donate both of the shared electrons in a bond

b)     Lewis acid (electrophile) – electron pair acceptor (BF3 in above)

c)     Lewis base (nucleophile, ligand) – electron pair donor (NH3 in above); when this bond breaks, the electron pair will go back with this molecule

Bond between metal and nonmetal (forming a cation and an anion), then the two atoms are attracted to each other by electrostatic attraction

1.     Ionic bonds between metals and nonmetals must have high difference in electronegativity between atoms

2.     Strength of the bond is proportional to the charges on the ions (by distance2)

3.     Bonds are ionic if electronegativity is very different!

A.     This predicts shape of molecule

A.     If a molecule contains no polar bonds, it cannot be polar; also, if it contains two symmetrically oriented polar bonds, the dipoles cancel each other out 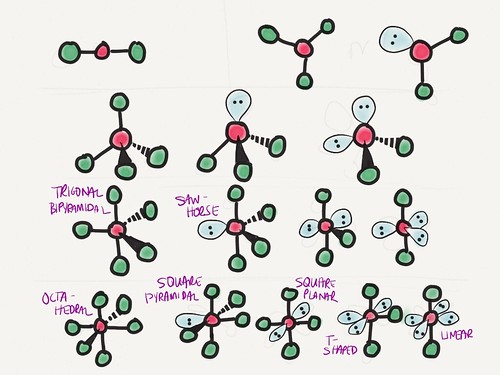 2.     Dipole-dipole forces – attractions between the positive end of one molecule and the negative end of another

c)     ↑ # of electrons → ↑ polarizability (and therefore the London dispersion forces)

1.     VP – the pressure exerted by he gaseous phase of a liquid that evaporated from the surface of the exposed liquid

1.     IONIC SOLIDS – held together by electrostatic attraction between cations and anions in crystal lattice structure

a)     Usually a metal and nonmetal

b)     Strong bonds, most ionic solids are solid at room temp

a)     Can be thought of as one giant molecule

3.     METALLIC SOLIDS – covalently bound lattice of nuclei and their inner shells surrounded by a “cloud” or “sea” of electrons

4.     MOLECULAR SOLIDS – solids composed of molecules in crystal lattice structure (may be all one element, for example, like tetrahedral P4, forming the solid)

1.     AMORPHOROUS SOLIDS – only solids that do not exhibit crystalline structure; molecules are irregularly bonded

2.     Can be soft and rubbery (formed by long, tangled molecules)

3.     Can be glassy (irregularly covalently bonded, hard and brittle)