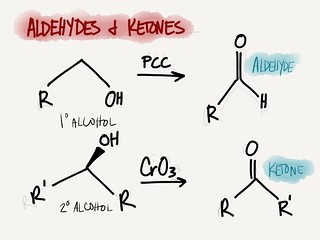 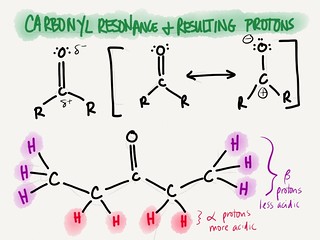 1.     α-protons are relatively acidic, so can be removed with a strong base (OH–) or alkoxide ion (OR–) to yield a resonance stabilized carbon

2.     The remaining electron pair that is left behind can be delocalized in the carbonyl π system

3.     Enolate ion – resonance stabilized carbanion where an α-proton is removed 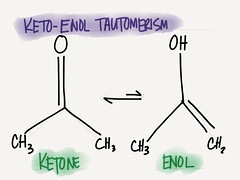 1.     Because oxygen is has high electronegativity, the C of the carbonyl group is slightly positively charged and therefore electrophilic

a)     It will attract nucleophiles and can be reduced (OIL RIG)

3.     NOTE:  LiAlH4 and NaBH4 are common reducing agents!! They add hydride (H and pair of electrons) to carbonyl 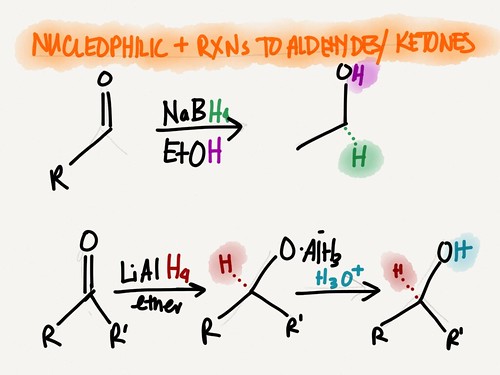 2.     Most common are Grignard and lithium reagents 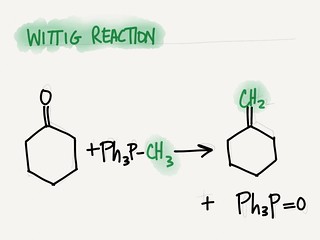 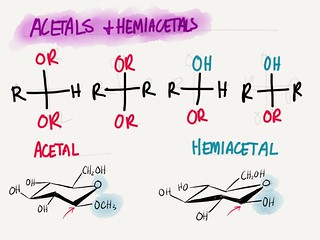 2.     Acetyl formation – formed when aldehydes or ketones react with alcohols in the presence of acid 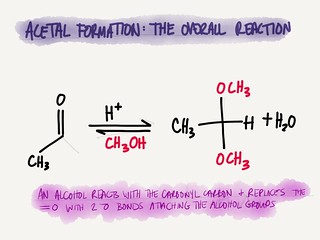 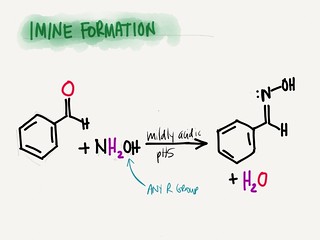 b)     One of the aldehyde/ketones must act as a source for the enolate ions, while the other will come under nucleophilic attack by the enolate carbanion 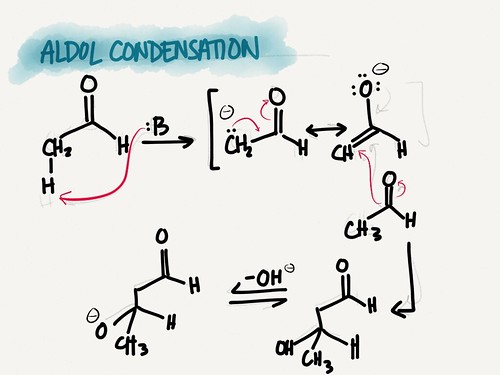 (2)   To avoid a mixture of products, choose one group with no α protons to remove so it cannot be converted into the enolate anion and therefore cannot be the nucleophile

a)     These new compounds are called β–hydroxy carbonyl compounds 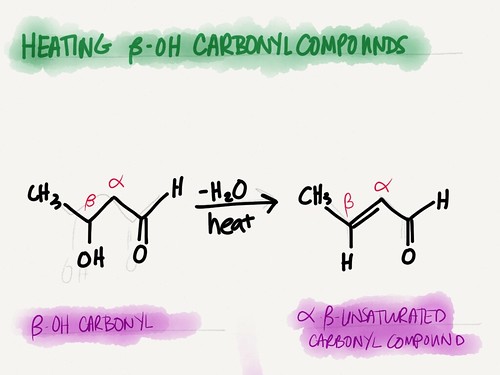 1.     With α,β-unsaturated carbonyl compounds the nucleophile attacks the β-carbon, thereby unsaturating the alkene and attaching to that spot

A.     ACIDITY AND HYDROGEN BONDING

1.     Carboxylic acids are stable because of resonance

B.     INDUCTIVE STABILIZATION OF CARBOXYLATE IONS BY ELECTRON-WITHDRAWING GROUPS

2.     The closer the electron-withdrawing group, the stronger the inductive effect

1.     Carboxylic acids form strong H-bonds because they contain a H-donor and H-acceptor

1.     Carboxylic acids that have carbonyl groups β to the carboxylate are unstable

1.     This is when a nucleophile ends up replacing an electronegative group on a carboxylic acid derivative

1.     Occurs when a carboxylic acid reacts with an alcohol in the presence of a catalytic amount of acid

2.     The H of the acid is replaced with the R group of the alcohol, resulting in an ester 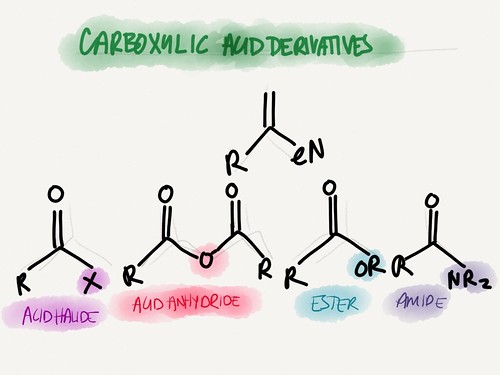 1.     Esters can react with either an acid or a base (nucleophile or electrophile), and by differing mechanisms, end up as a carboxylic acid

2.     In any nucleophilic addition-elimination reaction of an acid derivative, there will always be a tetrahedral intermediate → is this important?

1.     The treatment of triaclyglycerides with strong base yields a molecule of glycerol and 3 fatty acids

b)     Carboxylic acid plus acid halide

b)     Cannot be made from carboxylic acid directly! 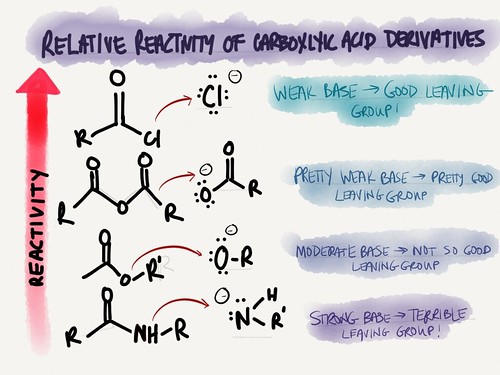 Reactions that occur in one step without the formation of intermediates; usually highly stereoselective 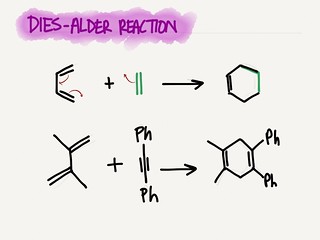 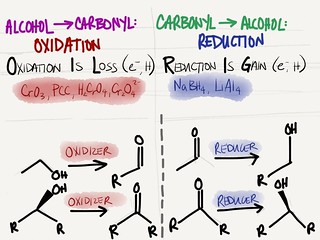 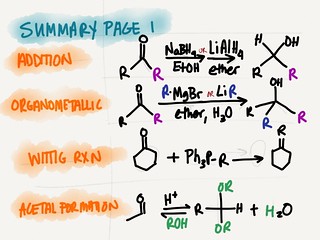 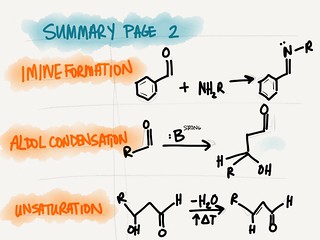 ○       The C=O bond is very polarized due to the high electronegativity of O, resulting in the carbon of the carbonyl group being very electrophilic

○       Protons α to the carbonyl are acidic and can be removed by a strong base to yield a nucleophilic carbanion, or enolate

○       Nucleophilic additions involve the attack of a nucleophile on the carbon of an aldehyde or ketone; these reactions break one of the π bond to form two σ bonds

○       Hydride reduction, a type of nucleophilic addition, can convert ketones or aldehydes into alcohols; alcohols can be converted back to carbonyl compounds using oxidizing agents

○       An aldol condensation is a C-C bond forming reaction where the carbonyl carbon of one molecule is the electrophile, while the α carbon of another carbonyl is the nucleophile

○       The reactivity of carboxylic acid derivatives decreases as follows: