The product of the force (only the appropriate component) and distance 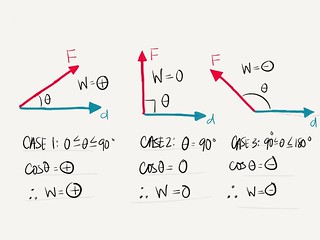 a)     Add all the work done by each of the forces

E.     Affects of angle of force on Work

F.     *The same concept can be applied to work related to kinetic energy; see below

Energy in objects that are moving and can exert a force; kinetic energy is the energy an object has after a force has been applied; the KE can perform work → KE units are the same as work!!

A.     To figure out how much kinetic energy an object has, use:

The energy an object has by virtue of its position (gravitational, electrical, elastic)

A.     Gravitational → if a brick is lifted and placed on a shelf, how much did its potential energy change?

1.     Gravity did work on the brick while the brick was lifted (negative work) 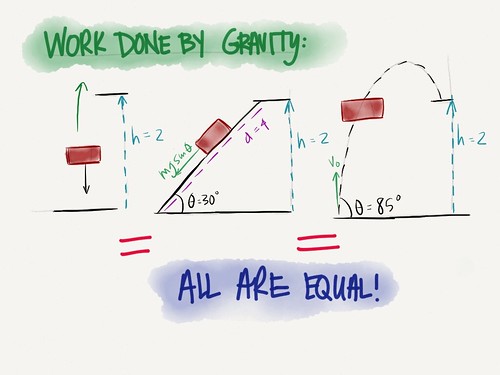 B.     Gravity Is a Conservative Force

1.     Compare a brick being lifted 2 m or being pushed up a ramp to the same height; the work done by gravity is the same

b)     Work depends only on the initial and final positions, not the pathway!

C.    Friction Is Not a Conservative Force

1.     Friction does depend on path taken

2.     There is no such thing as “frictional potential energy”

1.     Hooke’s law – the amount of energy required to stretch/compress something elastic (like a spring) is directly proportional to the distance it will stretch

B.     Conservation of Total Mechanical Energy

If the only forces acting on an object are conservative (e.g. no friction), then the object’s total mechanical energy will remain constant

1.     Any 2 positions or times should have the same total mechanical energy

C.    Using the Energy Method when There Is Friction

A.     Simple machines allow us to accomplish things with less force; best where there are only conservative forces and no energy is lost to friction, heat

2.     This quantifies precisely how much less force is required when using simple machines

A.     Heat is thermal energy and can be transferred in 3 ways:

1.     CONDUCTION – direct transfer of heat from one object to another caused by temperature difference

2.     CONVECTION – transfer of energy due to large scale motion of fluid (or air)

Product of mass and velocity (kg⋅m/s), is a vector

1.     J = impulse = change in momentum (remember signs! if a baseball changes direction and speed, one of the speeds must be negative)

4.     If there is a graph of F (vertical axis) and ∆T (horizontal axis), the area under the curve is the impuse

c)     Since the forces are equal and opposite, so are the impulses

a)     Elastic collision – total momentum and total KE are conserved

A.     Moment of inertia is the rotational analog of mass

B.     Torque is the rotational version of force

C.    Angular momentum is the rotational version of linear momentum (think of a rotating frisbee)

1.     Angular momentum must be defined relative to some reference point (often axis of rotation)

1.     Torque is the rate of angular momentum