A.     Atoms (the protons and electrons) are held together because of the attractive force of their electrical charge

1.     In virtually all cases, objects become charged by gaining or losing electrons

Charge can only be in whole numbers of +/- e’s

2.     Total electric charge is always conserved → if you pet a cat, you rub electrons off the cat’s fur; your charge is more negative and the cat’s is equally more positive

B.     THE PRINCIPLE OF SUPERPOSITION FOR ELECTRIC FORCES:

Describes how 2 or more charges affect a third

1.     Total force is the vector sum of the forces

2.     Principle of superposition:  the net electric force on a charge (q) due to a collection of other charges (Q’s) is equal to the sum of the individual forces that each of the Q’s alone exert on q 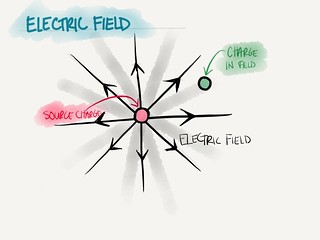 1.     If a second charge happens to be there, it will feel the effect of the field created by the original charge

2.     The electric force on a second charge q is exerted by the field rather than by the orginal charge

3.     Source charge(s):  the charge(s) that create the electric field 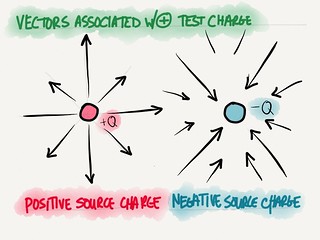 4.     Vector field:  describes an electric field, where each point in space around field is associated with a specific vector (tells strength and direction a positive test charge would feel)

5.     Remember, two charges create a force, but one charge creates a field! 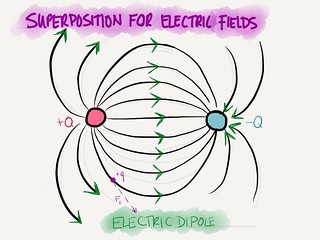 B.     THE PRINCIPLE OF SUPERPOSITION FOR ELECTRICAL FIELDS:

1.     Electric dipole – a pair of equal but opposite charges

2.     The force of a particle is always tangential to the field lin passing through that point

1.     Conductor – materials that contain charges that are free to roam throughout the material

a)     EX:  A + charge nearby will pull electrons to one side of a metal ball, polarizing the ball

2.     Dielectric (insulator) – material that does not have free charges; the electrons are tightly bound to the atom and cannot roam

a)     EX:  A + charge nearby will polarize each atom, which causes smaller electrical attraction

(note → not to be confused with ELECTRIC POTENTIAL ENERGY): 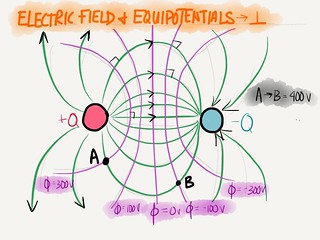 1.     Electrical field and electrical potential are similar, but potential is a scalar quantity (no direction)

2.     Think of electric field just in terms of value (number)

B.     THE PRINCIPLE OF SUPERPOSITION FOR ELECTRICAL POTENTIAL

1.     This is easier than for electric fields because potential is scalar → just add potentials together