a)     Conduction electrons in a wire are moving all over the place, but there is no net movement of charge (i.e., there is no current)

This is what causes current (sometimes called electromotor force

a)     For fixed voltage, note that resistance and current are inversely proportional

a)     ρ is resistivity and is inherent to the material

b)     Resistance depends on how we shape the material – a longer, thinner wire has more resistance than a short, fat wire.

b)     This is more of a statement about the behavior of certain conductors; a material is said to behave Ohm’s law if its resistance, R, remains constant as the voltage is varied; also, the current must reverse directions if the current is reversed

a)     Resistors – components with known resistance

(2)   Rtot will always be larger than the largest resistor! 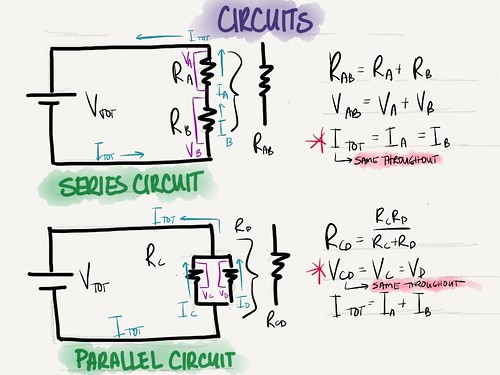 c)     RESISTORS IN PARALLEL – More complicated; it is the product of the resistors divided by the sum

(3)   Rtot will always be smaller than the smallest resistor!

2.     Note that the direction of the conventional current is opposite the flow of electrons!

a)     Series resistors → all resistors share the same current

(2)   Can use P = IV to calculate power dissipated by resistor, but use for only 1 resistor at a time (best to use P = I2R if calculating power for entire circuit)

A pair of conductors that hold equal but opposite charges; parallel plate capacitor is most common (capacitance is determined by size of plates and distance of plates)

1.     Charge on a capacitor occurs because current flows from battery source to the opposing sides of the capacitor

2.     Capacitance is how much charge can be stored at a certain voltage

b)     Note that capacitance is directly related to area, inversely related to distance (the closer the plates are, the greater the force between them and therefore more charge can be stored

a)     Capacitors discharge on their own, nonlinear (most happens at beginning) 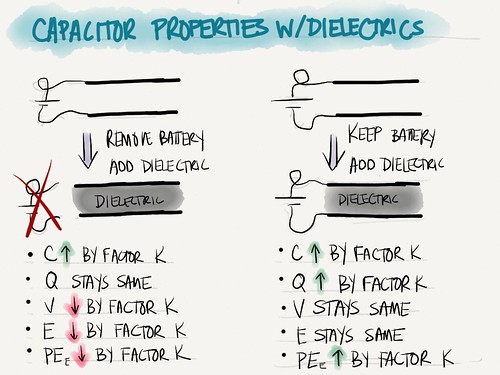 2.     Dielectric constant (K) – factor that capacitance is multiplied by if dielectric is present

(1)   K tells how much the dielectric increases capacitance

(2)   Q remains the same, since the charges on the capacitor still can’t go anywhere

1.     Electrons can jump the space between capacitor plate only under extreme circumstances 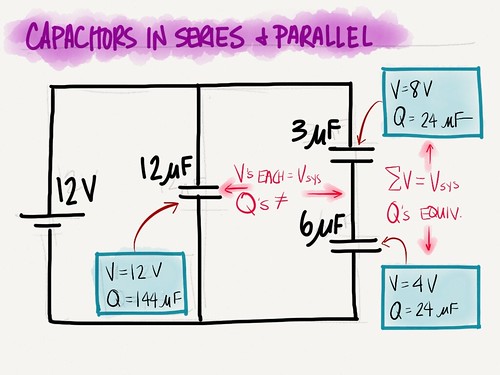 Voltage goes from peak high to zero to peak low in sinusoidal motion, at a frequency of 60 Hz (60 cycles/sec)

3.     Other equations are essentially the same:

1.     Since charge in motion constitutes a current, we can also say that magnetic fields are produced by electric currents

2.     Magnetic fields can only exert a force on a charge that is moving through the field 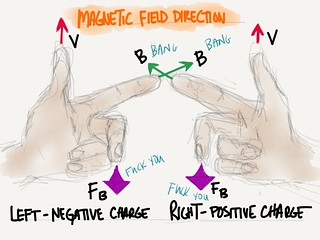 No, because the force a charge feels is always 丄 to velocity and charge

1.     Magnetic forces can only change direction of a particle, not speed it up or slow it down 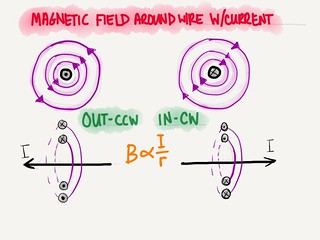 1.     Since moving charged particles create a magnetic field, a wire with a current will create one

2.     A loop of wire will create a magnetic field in the center of the loop

3.     Solenoid – a coil of wire with a current running through it, creating a magnetic field through the center

a)     Magnetic field lines emanate from north pole, curve around to south pole

b)     Electrons of the magnet atoms spin in one direction