A.     VIRAL STRUCTURE AND FUNCTION

1.     Genome – either DNA or RNA, either ss or ds, either linear or circular

a)     Genome is small but often uses >1 reading frame to code for proteins, so genes overlap

a)     Capsid – protein coat surrounding the genome (can be helical, rod-shaped, polyhedral)

c)     Envelope – a membranous component that sometimes surrounds a virus, composed of host cell membrane (with viral proteins) to allow fusion with a cell for future infection

4.     Naked viruses – viruses that do not have envelopes (all phages and plant viruses)

1.     Step 1:  Attachment (adsorption) – binding to the exterior of a bacterial cell

2.     Step 2:  Penetration (eclipse) – Injection of the viral genome into the host cell

(a)   Hydrolase – early gene product (1st made), enzyme that degrades the host genome

(4)   Next, capsids automatically assemble themselves around genomes 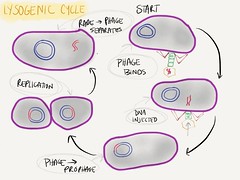 (1)   Upon infection, the phage genome is incorporated into bacterial genome and is now referred to as a prophage (host cell is now called a lysogen)

(2)   Prophage is silent, repressor proteins made by phage bind to operators

(3)   Everytime the host cell reproduces itself, the prophage is reproduced too

(a)   Transduction – during excision, the prophage may take a chunk of host cell DNA with it, and integrate stolen DNA into new cells

(b)   This may enable the cells to have a trait it did not originally possess (e.g., the ability to metabolize galactose)

C.    REPLICATION OF ANIMAL VIRUSES – similar life cycle as described above, with some differences

3.     Once inside, they are uncoated (genome is released from capsid), or, viruses fuse with the plasma membrane to release genome into the cytoplasm

4.     Next, viruses enter lytic cycle, the productive cycle (a lytic-like cycle), or a lysogenic cycle

b)     Productive cycle – same as lytic cycle, but instead of lysis of host cell, viruses are released by budding through the cell membrane

b)     When the virus enters the cell, the RNA-dependent pol creates a (+) strand from the genome

c)     The viral lifecycle then proceeds

a)     (+) RNA viruses that integrate into host genome as proviruses

a)     This is necessary because host cells, although they possess these enzymes, only produce them when they are preparing for replication

Do not contain membrane-bound organelles (including nucleus)

A.     BACTERIAL STRUCTURE AND CLASSIFICATION

a)     Genome – DS circular DNA chromosome; transcription and translation occur at the same time in the same place

b)     Plasmids – circular pieces of ds-DNA found in prokaryotic cells, often encode for gene products that may confer an advantage to the bacteria; capable of autonomous replication

(1)   Important because they orchestrate bacterial exchange of genetic information (conjugation)

b)     Wall – made of peptidoglycan, prevents lysis due to increased osmotic pressure

(1)   Peptidoglycan is unique to prokaryotes, polymer made of sugars and AAs (including D-alanine, which is different than eukaryotic L configurations)

(1)   Gram positive – dark purple stain, stains the thick peptidoglycan wall (nothing else beyond this wall)

(b)   More difficult to kill with antibiotics

(c)   Endotoxins – normal component of LPS membrane, cause extreme immune reaction if all these bacteria are killed at once

3.     Capsule (glycocalyx) – present in some bacteria, is the “goo” that makes it more difficult to eradicate infection and also enables bacteria to adhere to smooth surfaces

b)     Motile – used to describe bacteria with flagella

c)     Monotrichous – bacteria with flagellum at one end

d)     Amphitrichous – bacterial with flagellum at both ends

f)       Structure:  made of hook, filament, and basal structure

B.     BACTERIAL GROWTH REQUIREMENTS AND CLASSIFICATIONS

a)     Chemoautotrophs –  use CO2 as carbon source, and oxidize inorganic molecules as energy source

d)     Photoheterotrophs – require organic molecules as carbon source, but use sun for energy

b)     Minimal medium – contains nothing but gulcose and agar

b)     Facultative anaerobes – bacteria which use oxygen when its around, but do not need it

c)     Tolerant anaerobes – can grow in the presence of oxygen, but do not use it in their metabolism

a)     Respiration – glucose catabolism with use of electron acceptor (O2)

b)     Fermentation – no electron acceptor, waste product is either lactate or ethanol 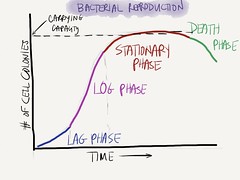 2.     Conjugation – a way for prokaryotes to exchange genetic material

a)     Lag phase – phase prior to exponential growth, where cell division does not occur even if growing conditions are ideal

1.     Endospores are produced by some G+ bacteria under unfavorable growth conditions

2.     Endospores – pieces of bacteria comprised of a tough, thick external shell made of peptidoglycan surrounding the genome, ribosomes, and RNA, all of which are required for the cell to become metabolically active when conditions are favorable

b)     Germination – reactivation of endospores

2.     Transformation – if pure DNA material is added to bacterial culture, bacteria can internalize the DNA under certain conditions and gain any genetic information from it

b)     F (fertility) factor – a key to bacterial conjugation; is a small circular piece of DNA that contains many genes for conjugation

(1)   Male (F+) – contain the fertility factor and transmit to female (F–) cells, which then become male

(a)   These cells are called Hfr (high frequency of recombination) cells

(b)   When Hfr cell performs conjugation, replication of the F factor DNA occurs just as it would in an F+ cell

a)     Hfr bacteria can provide a mechanism for mapping bacterial genome

1.     Most are nonmotile, multicellular eukaryotes (except yeast, which is unicellular)

2.     Chitin – material that fungal cell walls are composed of (also found in insects)

a)     Saprophytes – feed off dead animals/plants

b)     Parasites – feed off living organisms, doing harm to the host

a)     Most are obligate anaerobes (yeasts are facultative anaerobes

b)     Absorptive – digestion of nutrients takes place outside fungal cell

b)     Fragmentation – Mycelium can be broken into smaller pieces, each of which develops into a separate mycelium

(1)   Spores are covered by tough resistant wall and when conditions are favorable, spores will germinate

a)     Fungal adults are haploid (only one copy of chromosomes)

(1)   These can produce gametes that will fuse with other gametes, serve as a site for gamete fusion, or fuse with gametangia from other fungi of the same species

d)     Dikaryon – a cell with two nuclei, which happens after cells fuse but before the nuclei fuse to form a diploid gamete