1.     PCT – location where most of the resorption occurs (most of water

[70%] and glucose, which is active transport)

2.     DCT and other parts of nephron– where the remaining resorption takes place

DCT and collecting ducts; regulated by ADH and aldosterone

2.     Aldosterone – produced by the adrenal cortex:

a)     ↑ with low BP; causes increased resorption of Na+ by the DCT

D.    LOOP OF HENLE AS A COUNTERCURRENT MULTIPLIER

2.     Thin ascending limb:  not permeable to water, permeable to ions which are lost from high-concentrated filtrate

3.     Thick ascending limb:  not permeable; actively transports salt into the surrounding tissue, making it very salty, causing the medulla to pull water out of the DCT when ADH opens water channels 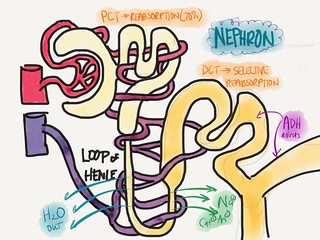 1.     Blood in the vasa recta has high concentration of blood cells and proteins, which further sucks water from the medulla, keeping the medulla very concentrated and salty

1.     JG cells (in afferent arteriole) are baroreceptors that monitor BP

b)     Angiotensin II is a powerful vasoconstrictor, also stimulates release of aldosterone

3.     Note:  this process takes days; compare to respiratory acid-base regulation, which is fast

OVERALL:  ↓ Ca++ in serumPTHParathyroidBone, gut, kidneys:  opposite of calcitonin

a)     Chief cells – pepsinogen (the chief likes to drink pepsi)

b)     Parietal cells – acid, intrinsic factor (if you get splashed with acid, you will intrinsically be a pariah)

3.     Some digestion (no protein digestion in mouth)

a)     Ptyalin (salivary amylase) – breaks down some starches into disaccharides

b)     Lingual lipase – some fat digestion

a)     Acid – HCl is secreted by parietal cells; this hydrolyzes some polypeptides and activates pepsinogen

b)     Pepsin – secreted by chief cells as pepsinogen before it is activated by HCl; breaks down protein (chief cells are stimulated by histamine to release this)

(2)   Contain lacteals that absorb cholymicrons (in lymphatics), then reach bloodstream through the thoracic duct

b)     Peyer’s patches – areas of lymphocytes scattered throughout small intestine

(a)   CCK –  secreted in response to fat in duodenum; causes pancreas to secrete enzymes, GB to contract, and stomach to slow motility

(b)   Secretin –  secreted in reponse to acid in duodenum; causes pancreas to release bicarb and water, neutral or slightly basic outcome

d)     Ileum and Jejunum– last portions of small intestine; absorption of the rest of the stuff

2.     Lipase – hydrolyzes triglycerides at the surface of micelles

1.     Bile – made of cholesterol and bile salts, emulsifies fat

4.     Production of cholesterol – liver takes up the cholymicron remnants and makes cholesterol

5.     Plasma proteins – clotting factors, albumin, globulin, fibrinogen are all made in liver

3.     Duodenum – amylase breaks down polysaccharides into disaccharides, brush border enzymes further break these down into monosaccharides

4.     Absorption – large, hydrophilic monosaccharides are taken up by secondary active transport (goes with sodium ion flow); once the cells have high monosaccharide concentration, they flow out with facilitated diffusion into nearby capillaries

5.     Storage – liver picks up these molecules and stores them for energy

3.     Duodenum – chyme is released into duodenum and stimulates release of CCK and secretin, which in turn causes GB to release bile and pancreas to release bicarb and other enzymes (trypsinogen is activated to trysin by enterokinase, which then activates other enzymes); these work on the tuna until all that is left are di- and tripeptides, which are hydrolyzed to AAs by brush border enzymes

4.     Absorption – secondary active transport pulls cell in, the facilitated diffusion brings it out into capillaries

2.     Stomach – nothing really happens since they are hydrophobic and float above acid

4.     Absorption – these freely diffuse into cells, where they are turned back into triglycerides, organized into cholymicrons, and travel via lacteals and the lymph system to finally reach the bloodstream

5.     Storage – picked up by liver and adipose tissue (both have lipoprotein lipase), which breaks triglycerides back down into monoglycerides and free fatty acids