The force that holds together protons and neutrons; very strong because it has to overcome the electrical repulsion of like charges

B.     Radioactive – the state of unstable nuclei

1.     Alpha decay – emission of an α particle, which consists of 2 protons and 2 neutrons

D.    Half life – time it takes for ½ of a sample of radioactive substance to decay

Combination of wavelengths and energies unique to each element; “fingerprint”; related to electrons getting excited then dropping to lower level, releasing energy

1.     Bohr’s model theorized that electrons had quantized energy states and traveled in certain orbits around the nucleus

2.     These electrons could “jump” to higher orbits and “drop” to lower orbits which would release energy and produce the emission spectra

C.    Quantum Model of the Atom 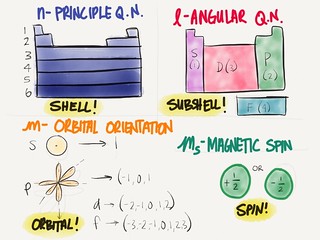 a)     n – principle quantum number; each period is assigned number in ascending order

1.     Energy shell in quantum model is analogous to the circular orbit of Bohr model

2.     The higher the shell number, the > the energy and the > the distance from the nucleus

1.     Subshell is composed of 1 or more orbitals (denoted s, p, d, or f); these get progressively more complex and higher in energy going from s → f

2.      Orbital – the 3D region around the nucleus where the probability is highest that the e– will be found

3.     Pauli exclusion principle:  there can be no more than 2  e–s in any given orbital 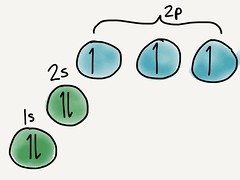 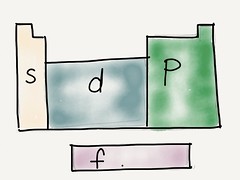 1.     Diamagnetic – an atom that has all of its electrons spin-paired

a)     These atoms will be repelled by external magnetic field

2.     Paramagnetic – atoms whose electrons are not all spin-paired

a)     These are attracted to a magnetic field

1.     In a few instances, atoms can achieve a lower energy state by having a completely filled or ½ filled d-subshell (that would be either 10 or 5 e–s)

1.     Anions put their electrons into the next available subshell

3.     Valence electrons from the highest shell are always lost first

1.     Electrons will not be in lowest energy shells 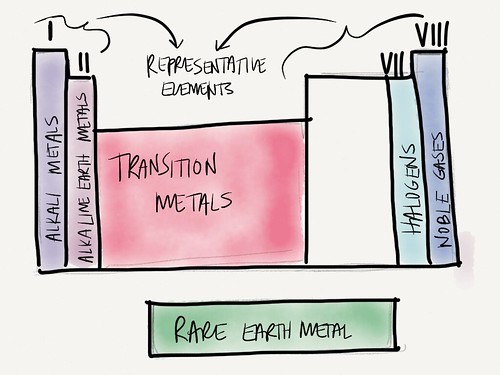 2.     The result is an effective reduction in the positive elementary charge (Z → Zeff)

B.     Atomic and Ionic Radius

1.     Radius decreases from left to right across a period (no new shells are added, but the attractive force between nucleus and electrons increases)

2.     Radius increases down a group because shielding increases, decreasing the effective nuclear charge the electrons feel

2.     IE increases from left to right, decreases down a group 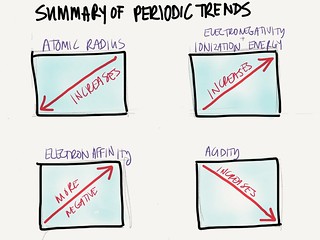 1.     EA (electron affinity) – the energy it takes to add an electron (neg if energy is released, pos if energy is needed)

2.     Typically, more neg moving left to right (except noble gases), and more neg up a group

1.     Electronegativity is a measure of an atom’s ability to pull electrons to itself when it forms a covalent bond

2.     Generally, increases from left to right, decreases down a group

1.     Acidity is a measure of how well a compound donates protons, accepts electrons, or lowers pH

2.     Increases from right to left and increases moving down