B.     sp hybridization can be determined by attached groups + lone pairs 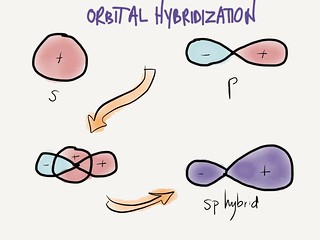 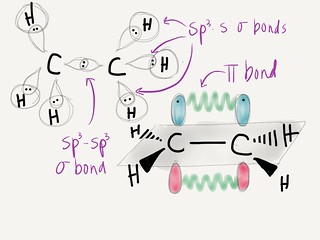 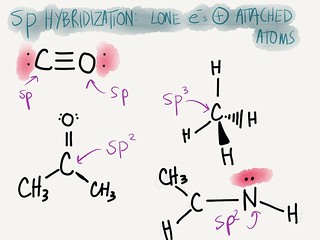 1.     Composed of 2 e-s that are localized to the region that lies on opposite sides of the plane formed by the 2 bonded nuclei (not directly between, like the σ bond)

Molecules with no double or triple bonds (no π bonds)

C.    Degree of unsaturation (aka index of hydrogen deficiency):

1.     1 electron per bond broken goes to each fragment of the molecule

2.     These fragments are now radicals

3.     *Not to be confused with heterolytic bond cleavage (dissociation), where both electrons go to one fragment, forming a cation and an anion

The greater s character, the shorter the bond

Compounds that have the same molecular formula and the same atomic connectivity, but differ only in rotation about a single σ bond)

1.     For saturated hydrocarbons, there are multiple orientations (conformational isomers):

a)     Staggered – more stable than eclipsed due to electronic repulsion

(1)   Anti-conformation (antistaggered)– most stable staggered form, where the two largest groups are 180º apart

b)     Eclipsed – less stable than staggered

c)     Infinite other conformations that are less important

a)     Chair conformation most stable; if functional groups, they are more stable in the equatorial (as opposed to axial) position

Compounds that have the same molecular formula and atomic connectivity, but differ in spatial arrangements of atoms 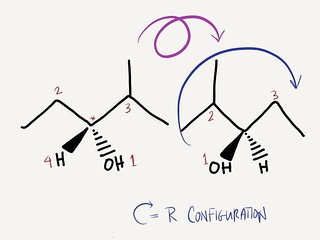 1.     Achiral – molecules that have a plane of symmetry and can be superimposed on their mirror images

2.     Chiral center – an atom (usually carbon) with 4 different groups attached to it

a)     These carbons are called stereocenter, stereogenic center, or asymmetric center

1.     Cahn-Ingold-Prelog rules are arbitrary rules to assign absolute configuration to a stereocenter:

a)     1:  Priority is assigned according to increasing atomic number. If isotopes are present, the higher-weight isotopes gets priority. If 2 identical atoms are attached to the stereocenter, the next atoms in the chains are compared until a difference is found

b)     2:  A multiple bond is counted as 2 single bonds (instead of saying a carbon is double bound to an oxygen, you’d say a carbon is bound to two oxygen)

c)     3:  Once priorities have been assigned, the molecule is rotated so that the lowest priority group points directly away from the viewer. Then trace a path from highest priority to lowest

b)     Different optical activity – see below 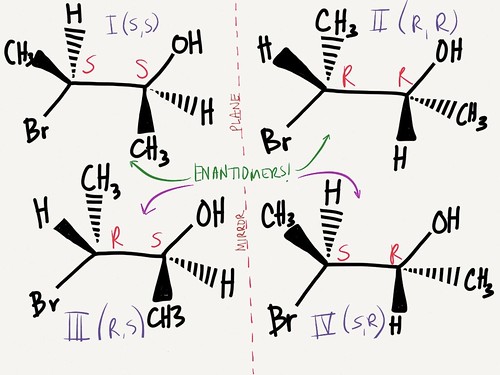 1.     Optically active – a compound that rotates the plane of polarized light

4.     A pair of enantiomers will rotate plane-polarized light with equal magnitude but in opposite directions!

1.     Stereoisomers that are not enantiomers (non-superimposable non-mirror images) 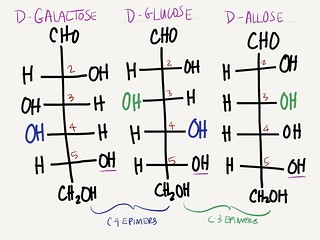 1.     Subclass of diastereomers that differ in their absolute configuration at a single chiral center (D-glucose vs D-galactose) 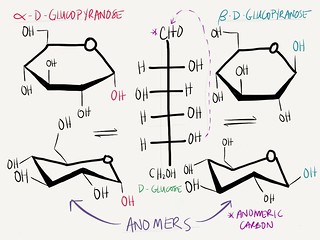 1.     Epimers that for as a result of ring closure (sugar chemistry)

1.     Compounds with > 1 stereocenters that have an internal plane of symmetry in the compound

2.     This reduces the amount of stereoisomers to 3 instead of 4 (compare to diastereomer section)

3.     Not optically active! The mirror images cancel each other out

1.     Diastereomers that differ in orientation of substituents around a ring or double bond (no rotation with these) 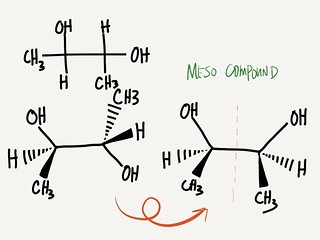 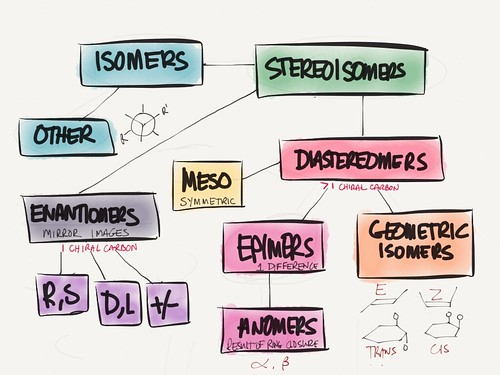 A.     Melting point and boiling point

Indicates how well molecules interact with each other

1.     Interactions are primarily due to London dispersion forces (attractive force due to temporary dipoles due to asymmetric electron distribution

2.     These forces must be overcome to go solid → liquid or liquid → gas (melting, boiling)

4.     MW increases the surface are for these forces to interact,

a)     Branching decreases MP and BP

1.     These are stabilized in 2 ways:  inductive effects and resonance (see below) 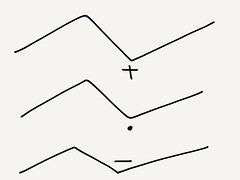 (1)   positively charged species with full (+) charge on a C 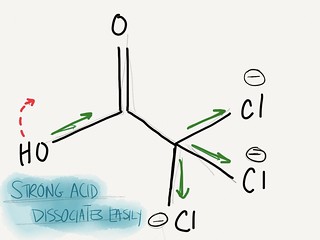 1.     Substituents surrounding a reaction intermediate can be thought of as either electron-donating or electron withdrawing groups

(1)   These are less electronegative than carbon

(1)   These are more electronegative than carbon

2.     Inductive effect – the stabilization of reaction intermediates by the sharing of e–s through σ bonds

3.     EX:  Why is trichloroacetic acid stronger than acetic acid?

a)     The Cl pull e–s towards themselves, making the O—H bond weaker (dissociates more easily)

b)     The conjugate base is very weak and stable

1.     Conjugated system – a system containing 3 or more atoms that each bear a p orbital; these orbitals are aligned, creating the possibility of delocalizing electrons 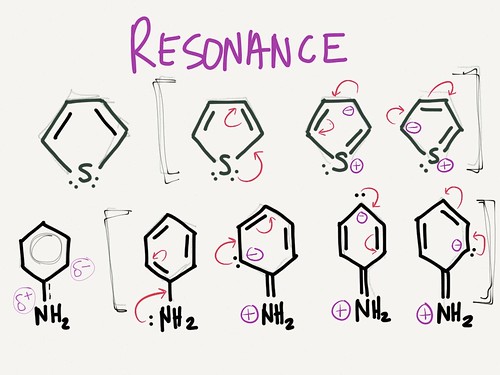 (2)   Resonance structures that minimize separation of FC are best

(3)   (-) charge should be on most electronegative atom, and vice versa

a)     Acidity of functional groups

(1)   Propanol, if it loses a proton, is not very stable; no resonance!

(2)   This makes the conjugate base (alkoxide ion) very strong (reactive)

(3)   Carboxylic acid, if it loses a proton, is stable due to resonance

(4)   This makes the conjugate base very weak (unreactive) 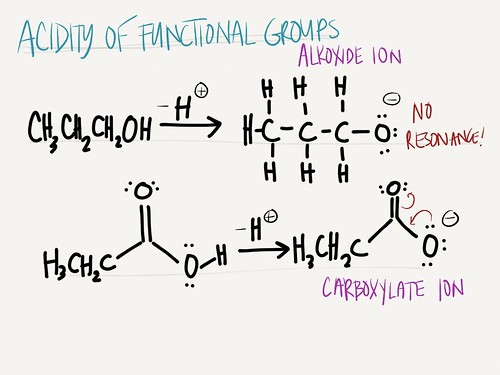 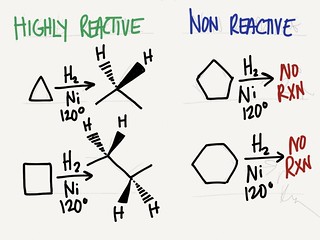 1.     Arises when bond angles between ring atoms deviate from the ideal angle predicted by hybridization of the atoms (cyclopropane and cyclobutane have high degrees strain)

2.     Deviation of the bond angles from the  normal 109º weakens the C—C bonds and increases reactivity

a)     Generally, C—C bonds are almost impossible to cleave via hydrogenation in a linear alkane, but are much easier to cleave an a cycloalkane with ring strain