π bond is broken and two σ bonds in the product result;  π electrons are more loosely held than σ electrons and can be nucleophilic 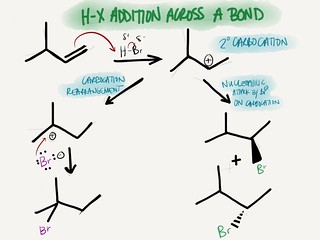 b)     Acid-Catalyzed Hydration of Alkenes – alkene is added to acid/water (usually sulfuric acid); ends with an alcohol 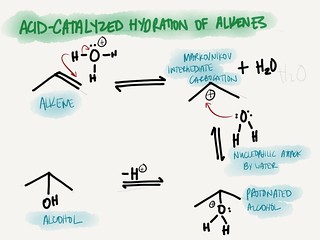 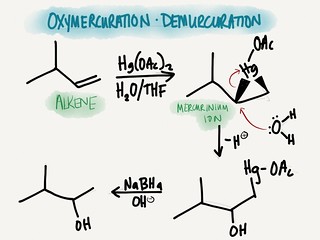 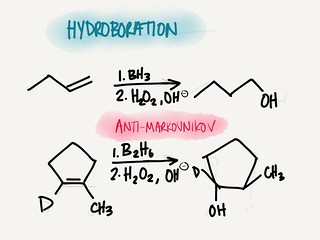 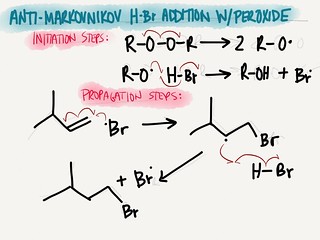 (2)   Bromine ions can attack from either side, giving racemic mixture of enantiomers

(3)   If bromine is in water, instead of 2 Br constituents, there will be a Br and OH 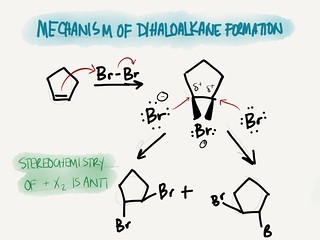 (1)   Only thing to know is that when an alkene reacts with a peroxy acid, an epoxide is formed

(2)   Also note, when an epoxide is hydrolyzed under acidic or basic conditions, anti addition (trans formation) is formed

4.     HYDROGENATION ㅡ unsaturated hydrocarbons can be reduced by H2 in presence of metal catalyst

b)     Hydrogenation of π Bonds of Alkynes ㅡ can fully hydrogenate, or can stop at alkene

(b)   Lindlar catalyst is used here

(a)   End product is alkene with H’s in trans formation

(i)          Transvestites need ot use ammonia to remove their nail polish 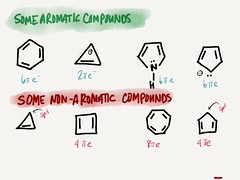 b)     Remember resonance structures; these electrons are included in #!

B.     Nomenclature of Substituted Benzenes 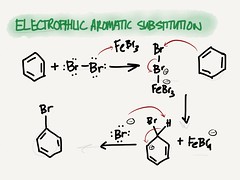 a)     In relation to the primary functional group, other groups are in these positions:

(3)   para (p) ― on the carbon opposite from the functional group

1.     Benzenes are typically very stable and will only react with very electrophilic reagents and will then undergo overall substitution reaction for an H on the ring

2.     When a group is already present on the ring, it can affect the electrophilic aromatic substitution in 2 ways:

b)     Electron donators (activating) tend to add other groups at ortho/para, include:

c)     Electron withdrawers (deactivating) tend to add other groups in meta position, include: 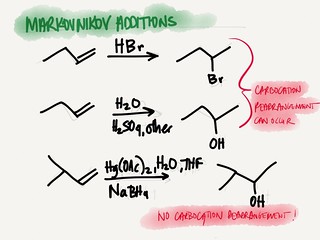 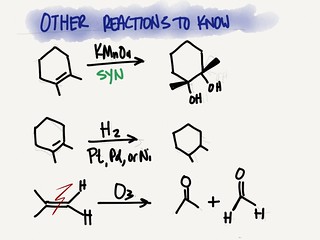 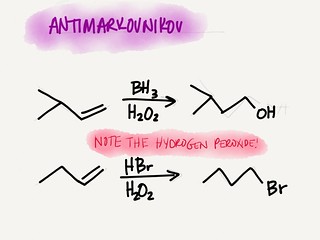 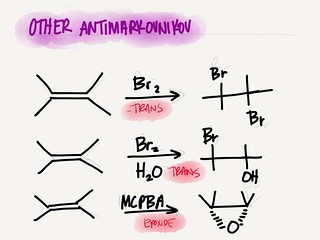 ○       The loosely held electrons in C⚌C π bonds can act as nucleophiles in addition reactions, which replace one π bond with 2 σ bonds

○       When the π electrons attack electrophiles, the resulting carbocation will be on the more substituted carbon and yield the Markovnikov (more substituted) product

○       Addition reactions are usually not stereospecific since the alkene is planar. Electrophiles will add with equal frequency to both faces of the bond, giving mixtures of enantiomers

○       Under the influence of very strong electrophiles, aromatic electrons can be nucleophilic, resulting in aromatic substitution

○       Substituents that add electron density to a benzene ring are activating for substitution chemistry, and favor ortho and para positions

○       Sutstituents that withdraw electron density from benzene ring are deactivating, and all but the halogens favor substitutions at meta positions