Compounds can be separated using solvents based on solubilities;

a)     Liquid-liquid extraction – a solution is shaken with a second solvent that is completely miscible with the first, then allowed to settle out into 2 separate and distinct phases, the compound of interest will distribute itself between the 2 phases based upon its solubility in each of the solvents 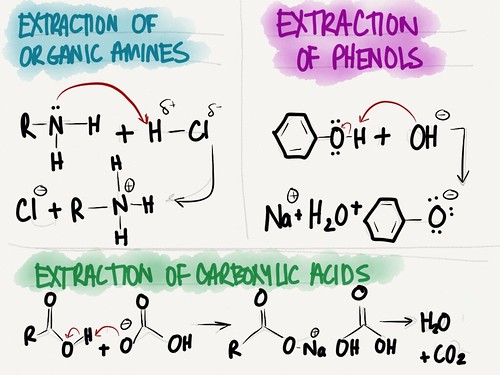 b)     This will also extract carboxylic acids

B.     CRYSTALLIZATION AND PRECIPITATION

1.     Precipitation – solidifying material from liquid phase, used when one wants to separate two compounds of variable solubility in given solvents

a)     Start with 2 compounds in a solution, then add a second solvent of different polarity, which may make 1 compound insoluble, forcing it to crash out of solution in solid

a)     Mixture of components is added to a solvent in which it is mildly soluble; it is then heated until fully solubilized, then cooled until crystals form

Some used for identification purposes, others as purification method

1.     Thin-Layer Chromatography (TLC) – compounds separated based on differing polarities (good for telling how many compounds make up very small amt of substance)

c)     Solvent is periodically added to top and collected at bottom

3.     Gas Chromatography – components are separated between moving gas phase and stationary liquid phase (based on volatilities) 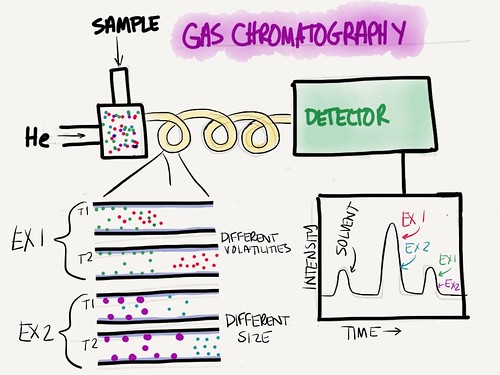 Process of raising temperature of a liquid to vaporize, then cooling back down 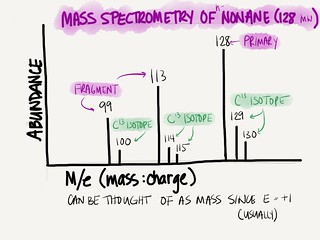 Allows the mass of compounds in a sample to be determined

1.     Molecules are bombarded by high energy electrons in a vacuum, which ionizes them

2.     Molecules then enter a magnetic region, which alters their flight path; the degree to which the flight path is altered is determined by the mass of the ion

3.     Output graph is mass/charge on x-axis, abundance on y-axis

4.     Remember, molecule may be fragmented and may contain elements with isotopes

IR wavelength range (λ) = 2.5 – 20 μm has the proper energy to cause bonds in organic molecules to vibrate (at distinct energy levels)

a)     Wavenumber – 1/λ (vibrational frequencies are given in this unit); is ∝ to the frequency and the energy of radiation (E = hv) 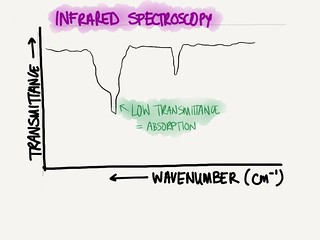 (a)   If a sharp V is not present, you can eliminate any group with carbonyl! 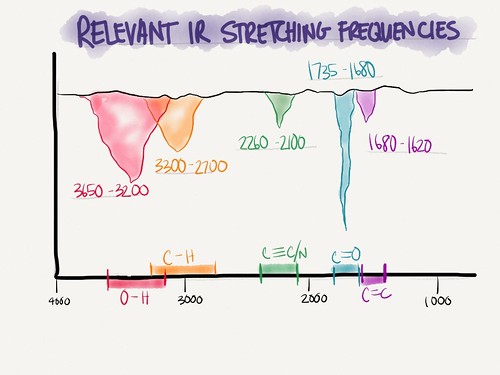 1.     Shorter wavelengths in UV and visible light (rather than IR); these cause electron excitation (valence electrons jumping up from ground state)

a)     Complexes of transition metals

1.     Features that can be deduced from NMR spectroscopy:

a)     Non-equivalent protons – determined by # of sets of peaks

(1)   Magnetic field created by electrons near the proton will shield the nucleus from the spectroscope, shifting the resonance upfield (right)

(a)   Electronegative groups will steal nearby proton’s electrons (deshielding them), thereby allowing the spectroscope to have a greater effect on those protons

(2)   The more deshielded a proton is, the further downfield in a spectrum it will appear

b)     Things that affect chemical shift:

(2)   Hybridization – the greater the s-orbital characteristics, the more deshielded the proton is → results in downfield shift (left

(3)   Acidity and H-bonding – protons attached to non-C (O or N), are quite deshielded → results in downfield shift (left)

4.     Integration – area under the curve is proportional to the number of protons in that peak

b)     The degree of splitting depends on the number of adjacent Hs, and the signal will be split n + 1 times (n = number of interacting/neighboring protons) 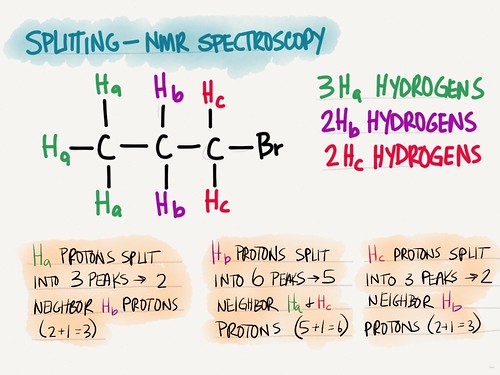 Similar to 1H NMR with a few important differences 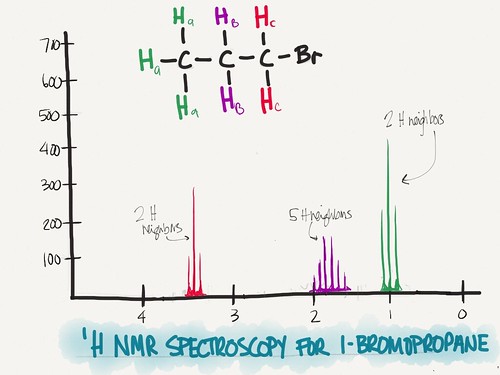 2.     Integration – cannot be integrated meaningfully; however, the height of each peak roughly corresponds to the number of H’s attached to carbon