A.     AMINO ACID STRUCTURE AND NOMENCLATURE

2.     Glycine is the only AA whose R-group is a hydrogen (only non-chiral AA) 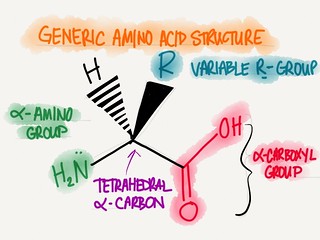 a)     All AAs derive from glyceraldehyde 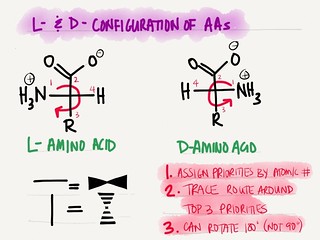 C.    ASSIGNING THE CONFIGURATION TO A CHIRAL CENTER

1.     There may be multiple chiral centers, but when we assign L- and D- configuration, we are referring to one specific chiral carbon, the penultimate carbon (last chiral carbon)

2.     L-glyceraldehyde – the smallest carbohydrate, all amino acids derive from this (and are ∴ all L- configuration)

3.     D-glyceraldehyde – all animal carbohydrates are derived from this

b)     R and S describe actual structure or absolute configuration

c)     D and L tell use what the precursor molecule was

1.     Amphoteric – has both acidic and basic activities (AAs)

4.     Henderson-Hasselbach equation:  describes the relationship between pH and pKa 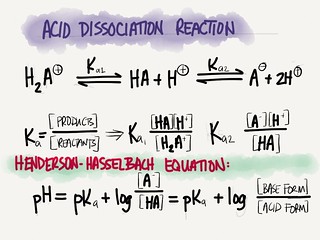 a)     ↑ pH means basic solution, so it will try to steal all the H+s and deprotonate

1.     Zwitterion – the (+) and (-) charges on the carboxylate and amino group cancel each other out

2.     Isoelectric point (pI)– the pH at which the molecule is a zwitterion

a)     pI is the average pKas of the functional groups

a)     R-group – either alkyl or aromatic side chains

3.     Sulfur-containing AAs – says nothing about polarity

a)     Cysteine (polar) and methionine (nonpolar)

4.     Proline – unique in that the side  chain is essentially a second AA forming a ring

2.     Think about this:  when pH < pI, that means there are lots of H+s floating around and some are bound to attach to the AA, making the net charges more (+), more attracted to the (-) electrode

3.     When pH > pI, that means there are few H+s floating around, so more will be pulled off the AA, making the net charge more (-), and more attracted to (+) electrode

1.     Between carboxyl group of one AA and the α-amino group of another AA through hydrolysis 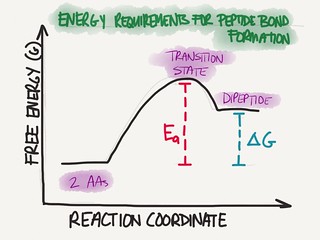 4.     Residue – AAs in peptides are referred to as residues 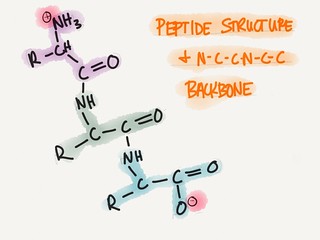 C.    PLANARITY OF THE PEPTIDE BOND

1.     No rotation around a peptide bond because of double-bond character between carbonyl C and N

2.     This results in a rigid, planar structure

D.    HYDROLYSIS OF THE PEPTIDE BOND

b)     Proteolytic enzymes (protease); many cleave bonds at specific AAs

Only formed between R groups of 2 cysteine AA side groups

2.     Cysteine–cysteine → becomes cystine when bound together

a)     Referred to as sequence

(3)   α-helixes are used in transmembrane proteins; all the partially charged areas are interacting with each other, and ∴ don’t interact with the hydrophobic membrane

(1)   β-pleated sheets have H-bonding between N-H and C-O groups, but they are often on separate chains

a)     Further folding of the secondary structure; usually driven by R-groups and their interactions with the solvent

A.     STRUCTURE AND NOMENCLATURE OF MONOSACCHARIDES 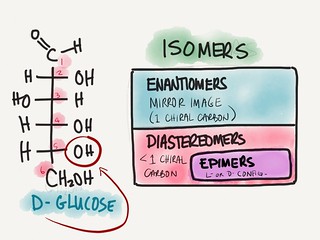 a)     1st –  aldo vs keto:  depends on whether aldehyde or ketone is present

d)     Most are referred to by their common name 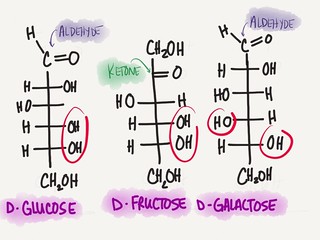 b)     Others:  ribose, glyceraldehyde

B.     ABSOLUTE CONFIGURATION OF MONOSACCHARIDES

1.     D- configuration – the direction the OH is pointing on the last chiral C in the chain (right)

a)     All proteins (but no sugars) in our body exist in L-configuration! (L for lamb) 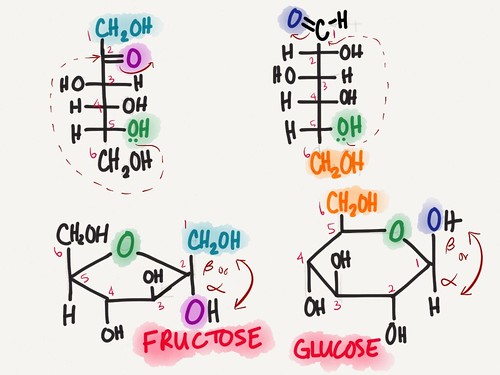 3.     Haworth notation – way to draw sugar; can convert from Fischer to Haworth

D.    STRUCTURE AND NOMENCLATURE OF DISACCHARIDES

b)     Once joined, the sugar is no longer free to mutarotate to α or β configuration!

a)     Named according to which C in each sugar comprises linkage

b)     Cellulose – polymer of cellobiose 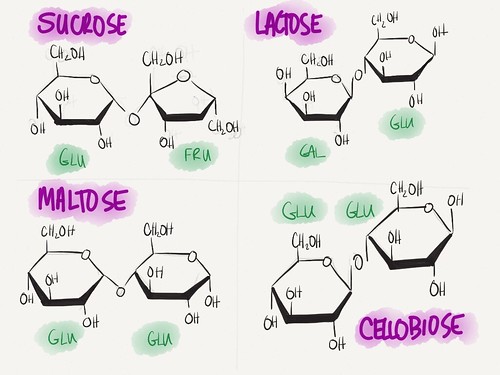 1.     Enzymatic hydrolysis breaks di- and polysaccharides down into monosaccharides

a)     Catalysts ↓ Ea and ↑ rate of reaction, but do not Δ final conc of reactants and products

2.     Only hemiacetals are at ⇋ with carbonyl (open chain), only in monosaccharide form

a)     All aldehydes, ketones, and hemiacetals will result in (+) Benedict’s test

2.     Glycerol is HOCH2–CHOH–CH2OH; the fatty acids are esterified to glycerol molecule

All steroids have tetracyclic ring, has both hydrophilic and hydrophobic tendencies (amphipath)

Carried in the blood packaged with fats and proteins into lipoproteins

1.     Phosphates (aka orthophosphates) are bound via anhydride linkage and is high energy bond (ΔG very negative)

a)     Negative charges repel each other

c)     Orthophosphate has ↑ favorable interaction with water than linked phosphates 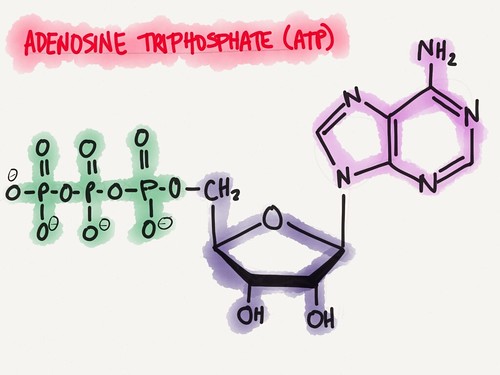 1.     ATP – used in cellular metabolism in addition to being RNA precursor

○       AAs consist of tetrahedral α-C connected to an amino group, a carboxyl group, and a variable R group which determines AA’s properties

○       The isoelectric point of an AA is the pH at which the net charge on the molecule is zero; this structure is referred to as the zwitterion

○       Electrophoresis separates mixtures of AAs and is contuced at buffered pH; (+) AAs move to the (-) end of the gel, and (-) AAs move to the (+) end’Proteins consist of AAs linked by peptide bonds, which have partial ⚌ characteristics, lack rotation, and are very stable

○       All monosaccharides will give a positive result in a Benedict’s test because they contain an aldehyde, ketone or hemiacetal, and are ∴ reducing sugars

○       The building blocks of nucleic acids (DNA and RNA) are nucleotides, which are comprised of a pentose sugar, a purine or pyrimidine base, and 2-3 phosphate units