Push or pull exerted by one object on another (i.e. tension, friction, gravitational electrostatic, air resistance)

b)     These forces are equal but in opposite directions; are called an action-reaction pair

1.     1st law vs 3rd law:  1st law implies forces are on a single object; 3rd law implies each force must be on a different object (on the objects of the action-reaction pair)

2.     3rd law:  if 2 forces are equal and opposite, it does not automatically mean they are an action-reaction pair; these forces have to act on each other in order to be this

3.     3rd law:  although the 2 forces must be equal, their effects are not necessarily equal (remember, if the mass of one is different, its acceleration will be different too)

A.     Mass and weight are not interchangeable; weight is a force (gravitational force exerted on mass)

1.     Every object exerts gravitational pull on every other object

a)     Is proportional to the product of the object’s masses

b)     Inverse-square law:  inversely proportional to the square of the distance between them (between the centers of the objects)

The opposite force exerted against an object exerting a force (usually gravitational); EX – book on table

3.     Normal force is the perpendicular component of the contact force exerted by a surface on an object

1.     Kinetic (sliding) friction – the mechanical friction between 2 surfaces due to roughness

a)     Coefficient of kinetic friction (μk) – depends on what the surfaces are made of, experimentally determined, no units

2.     Static friction – the attraction between electrical atoms of 1 surface with those of another

a)     Maximum coefficient of static friction (μs) → on MCAT, this is always > than μk! 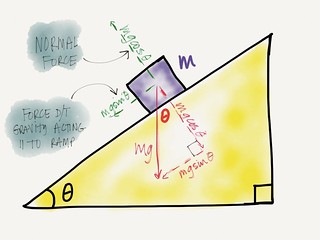 Block mass m = 4 kg is placed at the top of a frictionless ramp of incline angle 30º and length 10m.

1.     What is the block’s acceleration down the ramp?

A.     Pulleys change direction of tension (FT) of the rope that pulls on the object that the rope attaches to

B.     Pulleys can also decrease the force necessary to lift an object (Σ↑FT = m*g) 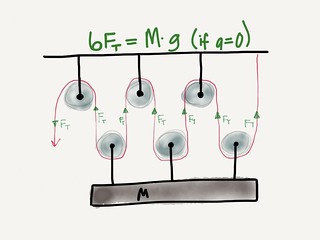 1.     To pull the plank up at constant speed, how much force is needed? 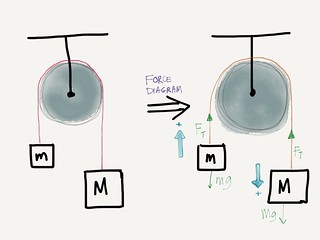 2.     Choose direction to call (+); usually which direction the objects will move