1.     Force – the spring exerts a force that is proportional to its displacement (Hooke’s law)

(2)   The (-) sign is required because if the spring is pushed/pulled one direction, its F will be in the opposite direction 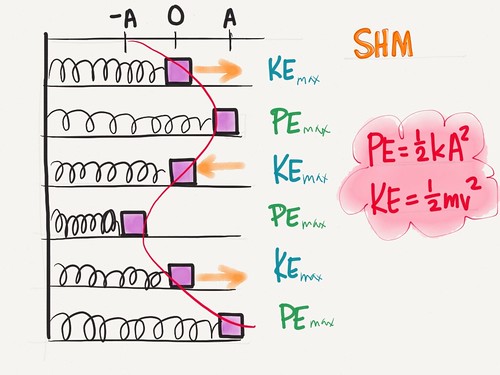 2.     Energy – the force changes as the spring/block move, so acceleration is not uniform; however, we can use conservation of energy to find how fast the block is moving

c)     For vertical spring – a new “natural length” needs to be established before figuring out oscillating motion; when Fgrav = Fspring, a new ⇋ has been established

a)     Period and frequency are inverse

c)     Note that amplitude does not affect frequency or period!

1.     Simple pendulum – meets criteria of no friction during oscillation, the rod/string suspending the mass has negligible mass, and restoring force is proportional to displacement

2.     The displacement of the mass is not the distance from ⇋ (as with spring), but as the angle it makes with the vertical (this only happens with small θ) 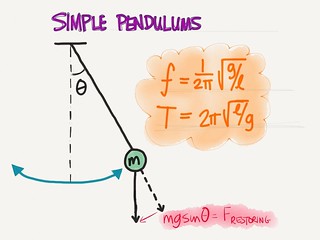 4.     Note that mass does not affect frequency or period!

A disturbance in a medium that transfers energy from one place to another (the medium is not transported, just the disturbance)

1.     Wave propagates in a direction that is perpendicular to the direction in which the medium is vibrating (think of wiggling a rope at one end, moves up and down even though wave goes left to right)

1.     Longitudinal (compressional) waves – the medium moves in the same direction that the wave propagates

2.     Surface waves – on the surface of water in which the particles undergo a circular motion; they are neither longitudinal nor transverse

3.     Deep waves – breaks first big rule for waves; it is dependent on wavelength

1.     The v of a wave is determined by the type of wave and the characteristic of the medium, not by the f (f is constant)

a)     Applies to different waves in same media

b)     Think about light and sound; they move at very different speeds (v is variable due to the type of wave

2.     When a wave passes into another medium, its v changes, but its f does not

a)     Applies to same wave in different media

b)     If v changes and f is constant, that means λ has to change

When 2 or more waves are superimposed on each other, they will combine to form a single wave

1.     Amplitude of resultant wave will depend on amplitudes of combining waves and how these waves travel relative to each other

a)     Constructive interference – amplitudes will add

a)     Destructive interference – amplitudes will subtract 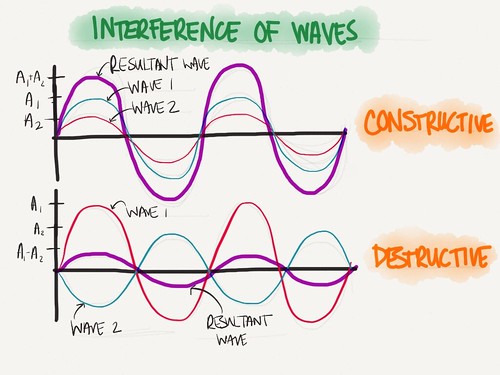 We shake one end of a rope with a certain frequency while the other is attached to the wall; the wave will travel down the length of the rope, hit the wall, then be reflected back 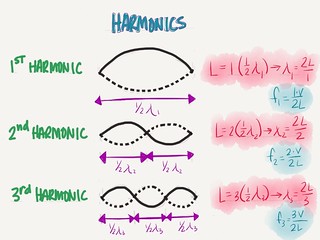 1.     If the frequency is just right, the waves will be traveling in exactly equal and opposite directs, resulting in wa wave that seems to stand still

2.     This is called a standing wave, where the horizontal positions of crests and trough seem to be fixed and the rope appears to be vibrating

4.     Antinodes – the areas of the rope where amplitude is maximized

B.     Harmonics and standing waves